From Mons to First Ypres…

the Graveyard of the Old Contemptibles

When the First World War broke out in August 1914 the BEF (British Expeditionary Force) sailed for Europe and gathered its forces at the town of Maubeugesouth of the small town of Mons. It was 80,000 strong and consisted of two corps and one cavalry division and a very small army when compared with the Germans or the French. However, it had one advantage over the large German force and that was that it was an army of professional soldiers.

On the morning of the 23rd of August elements of the German First Army collided with the BEF’s II Corps on the canal in front of Mons. It was here that the British army would fight its first battle of the war. This action cost the British and they eventually had to withdraw. But, the expert British rifle fire took its toll on the German columns extracting a loss of over 5,000 men.

After becoming involved in a series of flanking maneuvers known as ‘The Race to the Sea’ the BEF finally come to rest in the town of Ypres. The Ypres sector saw fighting every year of the war which included three major battles (First, Second and Third Ypres). Known as ‘Wipers’ to the British troops, Ypres was more or less destroyed during the four years of war. The Cloth Hall ruins became a defiant iconic landmark to the passing troops on their way to the front.

Day One: Depart by coach from your chosen UK collection point and proceed to Dover for our channel crossing by ferry and then on to Ypres to check in to the Novotel Hotel (located in the centre of Ypres). With the rest of the day at your leisure, you can explore the historic and beautiful town visiting St Martin’s Cathedral and St George’s Chapel and finishing at the Menin Gate. Then enjoy a meal in one of the many restaurants in the Grote Markt and sample the famous Belgium beers before taking in the Last Post Ceremony at the Menin Gate. 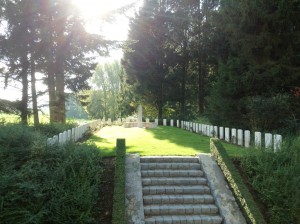 Day Two: At Mons we will see where the first and last shots of the war were fired and where the 4th Dragoon Guards engaged the Germans in what is possibly the first action by the BEF as well as the first cavalry charge. We then visit the Nimy Bridge where Dease and Godley held off the advancing German army with their Vickers machine gun, an act that won them both the Victoria Cross. A packed lunch (included in price) is taken in the town of Mons before we continue the tour with a visit St Symphorien Cemetery and pay our respects to the first and last soldiers killed in this terrible conflict.

Day Three: Today we look at the First Battle of Ypres and start our tour in the village of Zanvoodre where the Germans intensified their assault on the depleted British forces holding the salient. Here elements of the dismounted Household Cavalry fought to the last man. Their memorial sits on Lords Worsley’s original burial place and we shall hear his heroic story before moving on the Gheluvelt. At Gheluvelt a bayonet charge by the 2nd Worcesters restored the line at a crucial time during First Ypres and saved the BEF from possible defeat. Travelling back along the Menin Road to Ypres we discuss this famous and vital artery before walking the graves at Ypres Town Cemetery. Here some of the earliest casualties of the battle are buried including the Prince Maurice of Battenberg (the Royal Grave). He was the grandson of Queen Victoria and a relative of Queen Elizabeth II. Moving across the salient we visit the German Cemetery at Langemark and the action known as ‘the Slaughter of the Innocents’.

We end the day back in Ypres where you can take in the haunting Last Post ceremony at the Menin Gate and even lay a wreath to the fallen.

Day Four: No tour of the Salient would be complete without a visit to Tyne Cot the largest British War cemetery in the world with 11,965 graves of which more than 60% are ‘Known unto God’. We then journey back to the port for our crossing back to the UK. The bridge at Nimy where Dease and Godley won their VCs