Home » Tours » The Eternal Vigil: The creation and work of the CWGC (4-day tour) »

The Eternal Vigil: The creation and work of the CWGC (4-day tour)

The Eternal Vigil: The creation and work of the CWGC The Commonwealth War Graves Commission, previously known as Imperial War Graves Commission, was formally established by Royal Charter on the 21 May 1917. Its brief was one of the most ambitious ever undertaken: to commemorate in perpetuity those who had died in the service of the British Empire in the Great War.

After 100 years the Commission now cares for the graves of dead service men and women in 23,000 locations in 150 countries honouring 1,700,000 dead and missing of two world wars.

Our unique tour looks at the establishing of the Commission from its founding father Fabian Ware, along with the architects who played such a significant role in designing the memorials and cemeteries of which many of the major ones will be visited on this tour. We will also visit the CWGC visitor centre where you will see first hand the work carried out by master craftsmen who maintain these iconic sites and cemeteries.

As this is a tour of remembrance, Rifleman Tours would be happy, where practical, to take you to a relative’s resting place or memorial in order for you to pay your respects.

Day One: Depart from your chosen UK collection point and proceed to Dover for our channel crossing by ferry and then on to Ypres to check in to our hotel (located in the centre of Ypres).  The rest of your day is at your leisure, you can explore this historic and beautiful town visiting St Martin’s Cathedral and St George’s Chapel and the iconic Menin Gate. Then enjoy a meal and one of the famous Belgium beers in the stunning Grote Markt before taking in the moving Last Post ceremony held every evening at the Menin Gate.

Day Two: The morning sees us travel down to Arras for our visit to the Commonwealth War Graves Commission Visitor Centre where we see first hand the work carried out by the CWGC which includes the carving of headstones and the role of the Commission in the identification of recovered bodies from the battlefields of Western France, as well as many other facets of their work. We then move on to look at the first two cemeteries constructed (Louvencourt and Forceville) that became the experimental blue prints for today’s cemeteries. (A packed lunch is included in price along with museum entrance fees on touring days).

We then visit a number of major memorials and cemeteries starting with the Thiepval Memorial to the Missing of the Somme which bears the names of more than 72,000 officers and men of the Unite 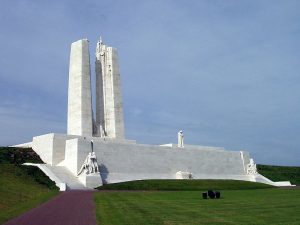 d Kingdom and South African forces who died in the Somme sector before March 1918 and have no known grave. Venturing off the Somme we then visit the Cambrai Memorial commemorating the fallen from the famous tank battle of 1917. The memorial features stunning sculptures by Charles Sargeant Jagger, a highly respected British sculptor. This is followed by visits to Vis-en-Artois memorial and cemetery to remember the men who fell in the 100 days Advance to Victory. Then onto the Canadian National Memorial at Vimy Ridge. This is outstanding memorial for more than 11,000 men of the Canadian Expeditionary Force killed during the First World War in France and who have no known grave. We then return to Ypres where the evening is at your leisure. Day Three: Today we continue our tour with the Loos Memorial that honours the missing from the battle of the same name. We then travel into French Flanders to Le Touret Memorial and the Neuve-Chapelle Memorial commemorating more than 4,700 Indian soldiers and labourers who lost their lives on the Western Front in WW1. We then visit the last cemetery created by the CWGC; Fromelles (Pheasant Wood) Cemetery before re-entering the Ypres Salient to see the impressive Ploegsteert Memorial to the Missing. This memorial was originally planned to be placed across the border in France.

After stopping for a packed lunch (included in price) we continue our tour with a visit to the largest Commonwealth cemetery in the world, Tyne Cot. The cemetery is the resting place of almost 12,000 soldiers of the Great War who were killed in the Ypres Salient. Moving on to St Julien, we stop at the stunning Canadian Memorial known as The Brooding Soldier remembering Canada’s participation in the first gas attacks. Following on to Essex Farm which is probably the most visited cemetery on the Western Front. It is here that John McCrae wrote the famous poem ‘In Flanders Fields’. We then finish the day at the Menin Gate. This iconic memorial designed by Sir Reginald Blomfield commemorates 55,000 soldiers who were lost in the Ypres Salient and have no known grave.

Day Four: We leave our hotel for Etaples Military Cemetery; the largest cemetery in France and designed by Sir Edwin Lutyens. There are many interesting burials here that your guide will point out before we return to Calais and your ferry back to the UK.