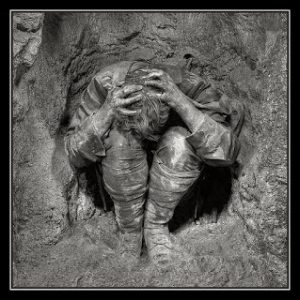 Shell Shock was first brought to the attention of the army doctors during the First World War and was believed to be the result of a physical injury to ones nerves. It was given its name as late as 1917 by a Medical Officer called Charles Myers.

Victims of Shell Shock often couldn’t eat or sleep and some suffered from physical symptoms such as uncontrollable shaking. Officers suffered the worst symptoms because they were called upon to repress their emotions in order to set an example for their men.

Shell Shock was not fully understood by the doctors and was thought to be caused by the soldiers being exposed to exploding shells. Army Generals of the time did not agree with this theory and thought it was generally a sign of emotional weakness or cowardice and so many soldiers suffering from this condition were often charged with desertion, cowardice, or insubordination. 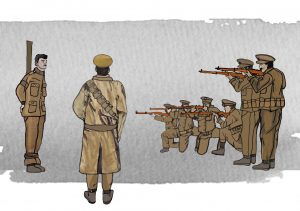 The unlucky ones were subjected to a mock trial, charged, and convicted and in some cases shell shocked soldiers were shot after being charged and tried or charged with cowardice. It was not until the 1990’s that these men were given posthumous pardons.

Much later in the war, medical staff started to realise that there were deeper causes. Some men who were suffering from shell shock had never even been in the front lines and consequently exposed closely to shell fire. Therefore the illness had to be physiological.

Soldiers who suffered severe symptoms (hysteria, shaking, nightmares, trench blindness and paralysis) found themselves at the mercy of Army Medical Officers. Some of these did not understand the symptoms fully and submitted those suffering to harsh treatments believing they would snap out of the condition. The treatments were:

Luckier soldiers were treated with a variety of other “cures” including hypnosis, massage, rest and dietary treatments. The very lucky would be would find themselves sent back in the United Kingdom where specialist treatment could be offered.

Many county lunatic asylums, private mental institutions and disused spas were taken over and designated as hospitals for mental diseases and shell shock which was then being referred to as war neurosis. By 1918 there were over 20 such hospitals in the United Kingdom and would today be classed as Psychiatric Hospitals.

Two of these hospitals were Seale Hayne in Devon (pictured left) and Craiglockhart. The later was established especially for officers and was known as Craiglockhart War Hospital for Officers, two of Craiglockharts most famous patients were war poets Siegfried Sassoon and Wilfred Owen.

Many soldiers entered these institutions as complete nervous wrecks, their mental state having being destroyed by the ravages and horrors of war.  One extreme case was Private Percy Meek who entered Seale Hayne having been driven mad by a massive bombardment on the western Front. He had reverted to an almost baby like state.

Arthur Hurst established himself at Seale Hayne and developed a number of miracle treatments that were able to cure 90% of shell shocked soldiers in just one session. He treated Percy Meek and eventually returned him to normality.

Hurst’s pioneering methods were both humane and sympathetic literally saving the lives of dozens of shattered men. The main work was occupational therapy, interspersed with intensive therapy sessions coupled with hypnotism. This treatment is a testament to the men who survived the horrors of the First World War. 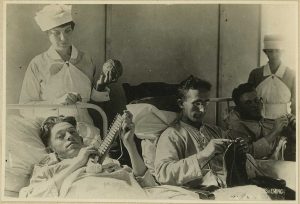 Shell Shock was also prevalent in the Second World War. One famous person to suffer from this was the comedian and poet Spike Milligan. He was affected while serving and his treatment, in his own words, was to be sedated and effectively put to sleep for 7-10 days.