Facial Hair and the British Soldier

With ‘Movember’ almost here and the annual event involving the growing of moustaches during the month of November to raise awareness of men’s health issues, it seems an apt time to discuss facial hair in the British Army particularly the moustache. 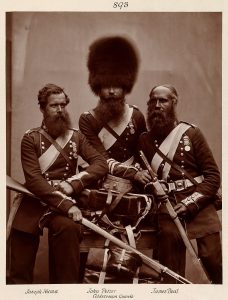 Over the years the British Army has had many dress codes but perhaps the strangest was the requirement to wear a ‘moustache’. In fact, it was actually law and from 1860 to 1916 it was a mandatory regulation for British Soldiers. Up until this time, facial hair was uncommon with only the occasional beard being grown by infantry pioneers, but moustaches were particularly rare.

This facial hair regulation came from the French who in the 18th century wore moustaches as a sign of strength and virility and was very noticeable amongst Napoleon’s ‘Old Guard’. The wearing of a moustache took almost 100 years to catch on as facial hair was frowned upon in Britain but it found popularity in the army of the East Indian Company in Bombay and became part of their dress code in 1854. At this time the Crimean War was taking place and although it was not at this time imposed as an official regulation, soldiers were prohibited from shaving their top lip. This essentially forces the soldier to grow a moustache if he is able! 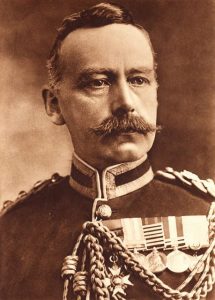 Over the coming years the moustache became a soldier’s self-expression, growing them in different lengths and styles to the point where it became a symbol for every regiment in the British Army with the passing of Command No. 1695 of the King’s Regulations 1906. In essence, the hair of the head will be cut short and the chin and under-lip will be shaved cleanly. Whiskers if worn will be trimmed and moderate in length. And so, it became a compulsory accessory to the British Army uniform.

By the time the First World War came along, the enforcement of this regulation was beginning to fade. Chemical warfare and the use of gas masks meant that moustaches and facial hair in general prevented their effective use. Lieutenant General Nevil Macready (pictured left), who did not like wearing a moustache himself, finally forbid the wearing of a moustache in 1916 proclaiming that all troops should be clean shaven. The only exception permitted were on religious grounds for example Sikhs and Muslims. However they still had to shave enough in order for the gas mask to create an airtight seal.

In today’s army, moustaches are permitted as a matter of personal taste but under current rules beards are only for a purpose such as covert operations and certain appointments and military ranks, such as Pioneer Sergeants, Drum Majors, Pipe Majors, Bugle Majors and Goat Majors who are allowed beards. However the army is now reviewing this ruling for fear of putting off recruits.